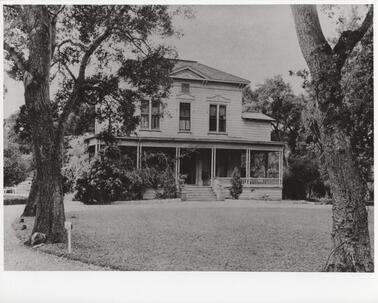 In 1872, after logging had ceased in the area and the populations had shifted from the surrounding hills to the valley, Archbishop Alemany of San Francisco dedicated a chapel on an acre of land at Ringwood and Middlefield in Menlo Park, California. This chapel, a mission of St. Matthew's of San Mateo, was to take over the spiritual guidance of the towns in the area, which included Menlo Park, Atherton, Redwood City, Palo Alto, and Mountain View. Nativity soon grew and was established as a parish in 1877, and a resident pastor, Rev. William Speckels, was appointed.
In 1878 a change of ownership in the land around the church limited possibilities of growth and Nativity moved. The chapel, which measured 40x55 feet, was transported on log rollers from Ringwood to another location on Santa Cruz Avenue.

A year later it was moved once again to its present location on Oak Grove Avenue. The moves prompted one local wit to call it "the roamin' Catholic Church." On moving to the new site, the chapel was enlarged into a church, the present altar and tower were built, and a 1,200-pound bell was forged and installed as a gift of Peter Donohue, the "Iron King" of Comstock Silver Mine lore. The bell rang for the first time on Christmas day, 1881. Around 1888, the church was again enlarged -- the transept was added along with a small sacristy. The remodeled church was dedicated February 12, 1888, by Archbishop Riordan of San Francisco. In 1900 the beautiful rose window was donated by the Altar Society and placed over the main altar. In the great San Francisco earthquake of 1906, the Church was virtually untouched, but the rectory suffered heavy damage when a fallen chimney crashed through the roof and trapped several priests on the second floor. They escaped unhurt down fire department ladders.

Architecturally, the Church of the Nativity is typical of many parish churches built around the end of the 19th century when timber was abundant and skilled carpenters were available. It resembles many such churches in New England. The basic cruciform plan has remained fairly consistent since the early English Medieval parish churches, whose architecture design became known as Gothic, and is distinguished by pointed arches, buttresses, and pinnacles. Nativity Church is constructed of redwood, which has been painted white. It features brilliant, hand-made stained glass windows, unique hand-carved side altars, and is surrounded by lawns, palm and oak trees.

​The Church of the Nativity was placed on the National Register of Historical Places in 1981. 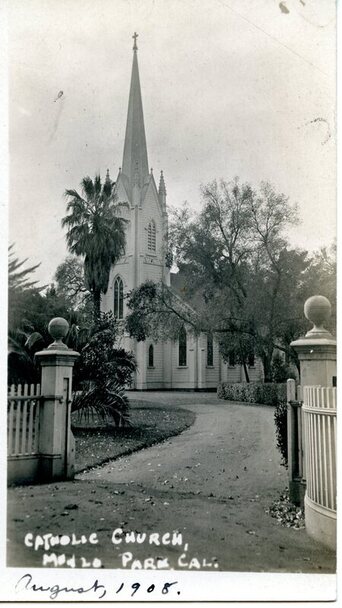 Our Parish Was Founded in 1872
​Excerpts from a History of the Church of the Nativity of Our Lord
Written by: Reverend Thomas J. McKeon, Pastor 1934-1963
(This was probably written in 1935)

The parish of the Nativity of Our Lord was started on 1872 at the corner of Middlefield Road and Ringwood Ave.

It extended, so far as can be ascertained of a time when the population of the district was widely scattered among the farming people from about where the present Mountain View now is to above the present Redwood City, and from San Francisco Bay to the summit of the Santa Murena mountains which divide the county into two distinct climates and districts.

When old St. Denis Church was in active operation, during the height of the logging operations, all the people of the vicinity went to Mass there. But after the logging ceased, Searsville, and the adjacent logging camps died, and the Parish at Menlo Park took over the work of caring for the religious needs of the vicinity, with the same natural boundaries, East and West, and the same appeal to the Catholics in the nearby hamlets, as St. Denis. Consequently, it may be safely said that the Parish of the Nativity of Our Lord was original.

When the shift in population took place from the denuded hills and mountains to the Valley, Father D. Dempsey of San Mateo, who had been in charge of the St. Denis Church in the foothills, started a church in Menlo Park upon an acre of land given by Robert Emmet Doyle, brother of John T. Doyle of Pius Fund Fame. J.R. Doyle, later of the grocery firm of Duff and Doyle, was the builder. The building was 40 feet by 55 feet and was largely built of redwood.  The lot stood at the corner of Middlefield Road and Ringwood Ave. in the district then called Ravenswood.

It was dedicated September 22, 1872 by Archbishop Alemany. The sermon was preached by Father Gleason, no initials are given but it was most likely Father William Gleason. It is stated that the building cost $5000.00.

Later, in 1878, when a resident pastor was place at Menlo Park, a change of ownership of the land surrounding the church acre necessitated a change of location for the church. Robert E. Doyle who had given the land for the church had put up the rest of his land for collateral to secure a note in favor of a wheat speculator named Friedlander who was trying to corner the wheat market. The corner failed and R. E. Doyle lost his land. James Flood of the Comstock, who held the note, had a piece of land with a church on it, a decided liability so he agreed to give another site, if the church would be moved. The new pastor, Father G. A. Speckels (the old priest speak of him as Spreckels, but his signature reads as I have it) had the church moved to the present site on Oak Grove Ave. 1878 or 1879.

On the new site, the church was enlarged by Fr. Michael Riordan, a tower was built, and a bell (1881) installed. The original altar was redwood, but Father Riordan placed the present altar and side altars in the church. Later between 1886 and 1888 the church was again enlarged, the transept was added, and a small sacristy was built. It is interesting to notice in the present church, where the old redwood paneling of the original church was added to the addition, and how the old vestibule, three feet wide, was made the place for the staircases to the choir loft which did not exist in the original church. This new and rebuilt church was dedicated Feb. 12, 1888 by Archbishop P.W. Riordan, assisted by Fathers Riordan, Sullivan (Most likely John Sullivan as assistant here then,) and Cullen (I find the name of Ambrose Cullen in the records.) The cost is not given in any record I know, but Clinch must have been the architect for I find records of payment to him. The builder is not given.

One of the outstanding dates in the history of Menlo Parish was the consecration of Holy Cross Cemetery on Santa Cruz Avenue, whence the name, November 1883 on land first purchased in 1876, for that purpose.

That morning, Archbishop had confirmed a class. After the confirmation, the Archbishop, Fathers Riordan, Brady, (the Assistant) and Birmingham, (pastor of San Mateo) went to the cemetery with nearly 1500 people and consecrated it. That same day, Mrs. Joseph A. Donohoe gave six sets of vestments and Daniel E. Sheerin gave the marble baptismal font.

The opening of the Hall was also a great event and electricity was wired from Redwood City to Menlo Park for the first time to light the hall.

So long as the church was attended from San Mateo, there was no need of a residence for the priests, but when Father Speckels was sent as the first resident pastor, he determined to build a residence for himself on the present site. The house was a one story frame structure, principally of redwood though the joists and large timbers are pine. There were six rooms, and the house, if one may believe the reports was very plain and unpretentious. During the construction of the house Father Speckels lived with the Colemans on the Coleman Tract, as it was known later.

At first, three families stood out in the Catholic life of Menlo Park, the Donohoes, the Doyles and the Athertons; then the Duffs and the other Doyles, James R. Doyle’s family, the Moloneys, the Moreys, the Weedens, the Nash family, Sweeney and Crowe families were some of the outstanding pioneers.

The first resident pastor was G.A. Speckels. He had built the first residence, moved the church to the present site, and laid out the grounds. He was a forceful personality, capable and energetic. It is said that his was a late vocation, but this cannot be verified here. His last baptismal record was April 13, 1881. He was succeeded by Fr. Michael Riordan, 1881-1899, a man remarkable in many ways. He was offhanded and friendly with rich and poor alike, was kindly to a fault to the down and out, and in spite of an easy going manner, was liked and respected by all. He loved horses in the “horsey” age, and this made him “persona grata” to Stanford and other horsemen of the period, and I have been told that the sandstone of the Seminary was Stanford’s gift to the Seminary through the influence of Father Riordan. He had built the beautiful belfry, installed the bell, enlarged the church twice, and doubled the rooms in the residence. He laid out the cemetery to it present plan, and when he left to go to Berkeley to be pastor, he was regretted by practically all.

Father John Brennan came then in 1899-1901. In the two years he was pastor, he left an impression that still survives. He enlarged the sanctuary, and built the enlarged sacristies, installing the rose window over the altar, paid for by the Altar Society, 1900. Either he or Father Riordan had the Jennings Family buy the windows on the sides of the transepts, and the Convent of the Sacred Heart and the Children of Mary pay for the two windows on each side of the main window. From the indications Father Brennan was responsible. On a trip to Europe, he died in France because he refused to drink wine, and insisted upon water, he was a total abstainer, and so contracted Typhoid, July 19, 1901.

A few years later, the 1906 earthquake caused little damage to the church, window, steeple and bell, but the rectory suffered significant damage.  It was restored almost immediately.  The current Rectory was built in 1941.  In 1908, a Nativity Hall was built which hosted highly spirited events, including the St. Patrick's Day entertainment, highlighted by Irish tenors and Irish jigs.

The pastorate years of Fr. Thomas J. McKeon between 1934 and 1963 were a tremendous change for Menlo Park and the church.  During the Depression, Fr. McKeon established missions in East Palo Alto and Fair Oaks, both of which became parishes following World War II.  The original Nativity parish was divided in 1950 when St. Raymond's church was established west of El Camino Real.  In 1961, St. Denis parish was rededicated west of the Alameda to serve Sharon Heights.

In 1963, following Fr. McKeon's death, Fr. Edmund Ford, who spent many years as a Navy Chaplain (his last assignment was Chaplain aboard the USS Enterprise CVN 65), took over at Nativity.  In 1972, Fr. Ford oversaw the church's renovation and hired Thomas Church to redo the grounds (Church's designs are adhered to this day).

Monsignor Steven D. Otellini became Pastor 19 years ago in 2003 making many improvements to the interior of the Church, refurbishing the altars, pews, carpet and painting inside and out, and the Sobrato Pavilion at the school.

This striking Gothic Revival Church is integral to the basic fabric and the history of Menlo Park.  Nativity was placed on the National register of Historic places.

Note: According to the Baptismal Records, the Father Riordan mentioned here is Father Michael O’Riordan